Romir/GlobalNR: influence of the Chinese Economy

Residents of the world’s leading countries were asked to indicate their level of agreement with the statement “If the Chinese economy gets worse, all countries’ economies will get worse”. Most of the respondents (57%) agree with this position. On the contrary, 12% of the world respondents have the opposite opinion. India has become a leading country with the highest share of people who agree with the statement.

During the global survey in the spring of 2020, Romir research holding and GlobalNR, the international community of research companies, have explored global opinion on some key issues of society’s lifestyle, including medical issues, attitude on social processes, politics, global leadership, social trend, and cutting-edge technologies. The research was conducted in 10 countries*, more than 7100 respondents from different socio-demographic groups participated in it.

So, the majority of the world residents (57%) agree that an economic downturn in China can negatively affect the economies of other countries (see Histogram). On the contrary, 12% of the respondents share the opposite opinion. One in four respondents (26%) stayed neutral toward this question.

The residents from India (70%), South Korea (67%), and Thailand (66%) have become the leaders with the highest share of people who agree with the statement. Russians, in turn, have shown the results close to an average value (55%). Speaking about the USA, its residents least of all believe in the possibility of a negative influence of the Chinese economy (45%).

Histogram. Please indicate your level of agreement with the statement: “If the Chinese economy gets worse, all countries’ economies will get worse”? (%) The question was not asked in China. 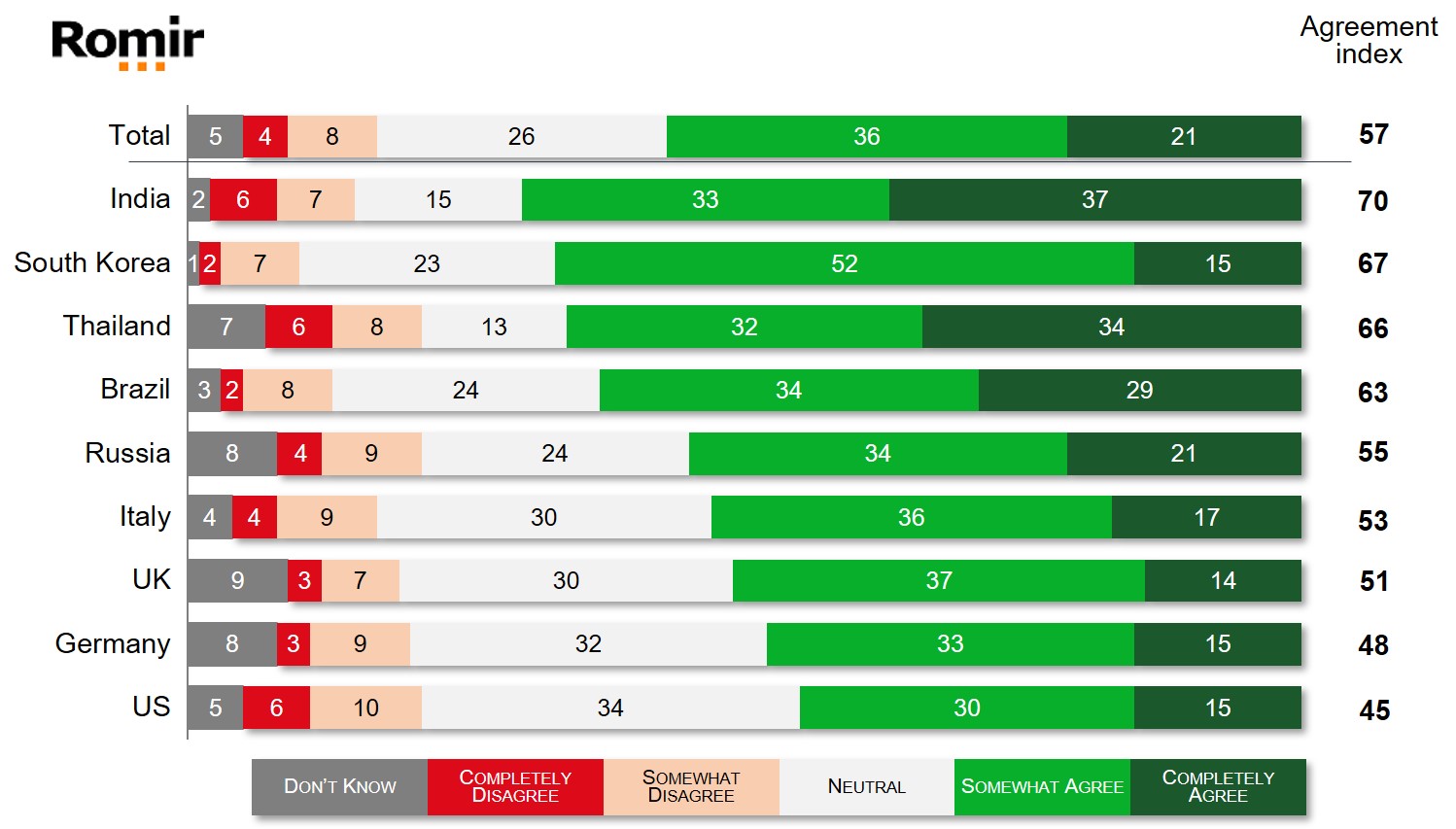 «It’s obvious that globalization makes us more earthlings, and the interdependence of regional economies is constantly increasing. However, we see a geographical determination in our research – anxiety increases pro-rata to a territorial approaching. Only Brazilians are the exception of the rule, but the reason is in similarity and responsibility after all Brazil is the country which has become a strong regional leader with the ambitions to affect the global economy», - Andrey Milekhin, the president of Romir research holding, Doctor of Science {Sociology} and the founder of Mile Group comments on the results.

* The research by Romir and GlobalNR was conducted in Brazil, Great Britain, Germany, India, Italy, China, Russia, the USA, Thailand, and South Korea. Overall, more than 7100 respondents from different socio-demographic groups participated in the research. In Russia, 800 respondents were surveyed. Method: online on Romir Scan Panel.

Romir is the largest independent research holding, focusing on marketing, media, social and economic research. Romir is a part of Mile Group and has a well-developed research network with its own suboffices and group companies within the main regions of Russia and CIS countries. Romir is the exclusive representative of Gallup International Association and GlobalNR in Russia and CIS countries with the research geography over 100 countries.