Russians have only one bank card for any situation

Romir research holding within the national poll* has asked the respondents about the use of bank cards. Such surveys were also conducted in 2015 and 2012. The results of the last one showed that Russians shrink from collecting plastic cards and choose only one or two of them but use it regularly.

Histogram 1. Possession and use of bank plastic cards. 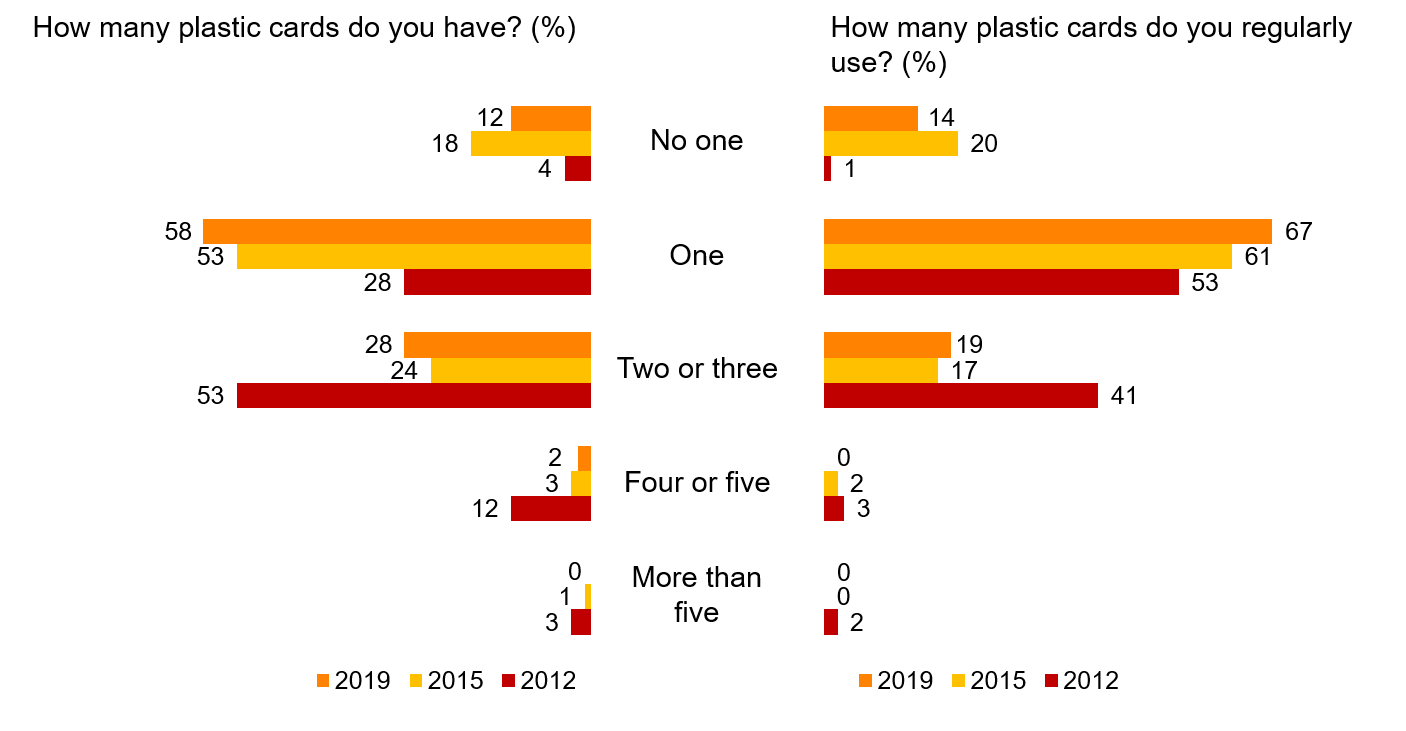 One in eight Russians (12%) don’t have any bank cards. Over the last four years the number of such Russians has decreased by 6%, but over the seven-years period we see the threefold increase.

Speaking about the use of plastic cards, it’s worth mentioning that the situation is relevant to the data on card possession. So, two thirds of the respondents (67%) regularly use only one plastic card and the share of such answers has been constantly increasing. One in five Russians (19%) use two or three bank cards. Since 2012 the share of such answers has decreased more than twofold – from 41%. And almost nobody uses three cards all at the same times.

The last question covered the operations with plastic cards. Thus, the offline purchase of goods and services (63%) has become the most popular answer this year (see Histogram 2). In 2012 the share of such answers was the same. 58% use plastic cards only to withdraw cash in ATMs. Over the seven years the share of such answers has decreased by 10 p.p.

Besides, over the same period the share of Russians who use plastic cards for online paying for goods and services and paying via ATMs has decreased (from 55% to 30% and 42% to 23% relatively). 22% of the respondents accumulate money on the bank card. In 2012 one third of Russians claimed such a use of plastic cards.

Andrey Milekhin, the president of Romir and Doctor of Sociological Sciences, comments on the results: “New technologies are actively implemented I our life. Nowadays we can pay for purchases by smartphones, watches and rings, i.e. plastic cards take the back seats to these cutting-edge ways of payment. Besides, modern customers become more literate. After playing with plastic cards of different banks for long enough many people opts for the more convenient one”.

*The poll surveyed 1500 people aged from 18 and older, residing in all types of cities and villages in all federal districts. The sample represents the adult population of Russia.

Romir is the largest Russian private holding specializing in marketing, media and socio-economic surveys. The company has its own large regional network in Russia and countries of former Soviet Union. Romir is an exclusive representative of Gallup International, the international research association, in Russia and CIS countries with the research geography over 40 countries.