Over the year the share of Russians who don’t save at all has significantly increased. In 2016 such answer was given by 11%, in 2017 – by 18%, and this year – 24%. That said, the number of Russians who admitted to continue saving has significantly decreased. The major part of the respondents still saves on food (17%) but this index has decreased more than twofold compared with the previous year. One in eight (12%) claimed the saving on traveling against 30% last year. Concerning other items, they received less than 10% for each other. 9% continue buying new apparel and footwear with care, 12% of the respondents (6% for each other) save on entertainment and culinary delights, 5% - on spirits and cigarettes, 4% - on restaurants. Concerning other items, share of those who save has decreased to 1-3%. These are the results of the poll conducted in 2017 when the consumer situation was better than in 2016. It can be said that the hard times for the consumers have passed away.

In March Romir research holding in the course of a regular poll asked the respondents to tell us what were the subjects of their saving last year. The same polls were held in 2016 and 2017, and in 2015 we held the poll on plans on saving. Thus, we have the entire gamut of consumer behavior dynamics during the difficult economic period.

According to the obtained data, two positive things can be noted. The share of Russians who don’t save at all has significantly increased over the year. In 2016 such answer was given by 11%, in 2017 – by 18%, and this year – 24%. Men gave such answers more often than women, Russians aged from 18 to 24 and respondents with high income.

So, during the previous polls the largest share of Russians has admitted to save on the grocery. And now this index is still the highest in comparison with other items. However, 39% of Russians saved on food last year, and only 17% have given such answer this year. This answer was given more often by women, Russians aged over 60 and respondents with low income.

Running second to food is travelling. 12% of the respondents claim the saving on this item. Last year this index was 30% and exceeded the level of 2016 – 21%.

Concerning other items, they received less than 10% for each other. From 33% in the previous year who could afford buying apparel and footwear, this figure has decreased to 9% this year. Last year 30% saved on culinary delights, and this year – only 6%. 6% also save on entertainment, though in the previous year this figure was 30%. 5% of Russians continue saving on spirits and cigarettes while last year the share of such answers was 21%.

Concerning to other items which had 10-20% of the votes last year, now the share of such answers has decreased to 1-4% or equaled zero. Thus, to the date, 4% of Russians claim the saving on restaurants. Last year this figure was 20%. 3% still save on consumer services (13% in the previous year). 2% claim the saving on purchasing different gadgets (15% in the previous year). Saving on cosmetics, medical services, transport and sport activities was claimed by 1% for each other. No one respondent claimed the saving on mobile services.

Picture 1. Items of saving during the crisis. 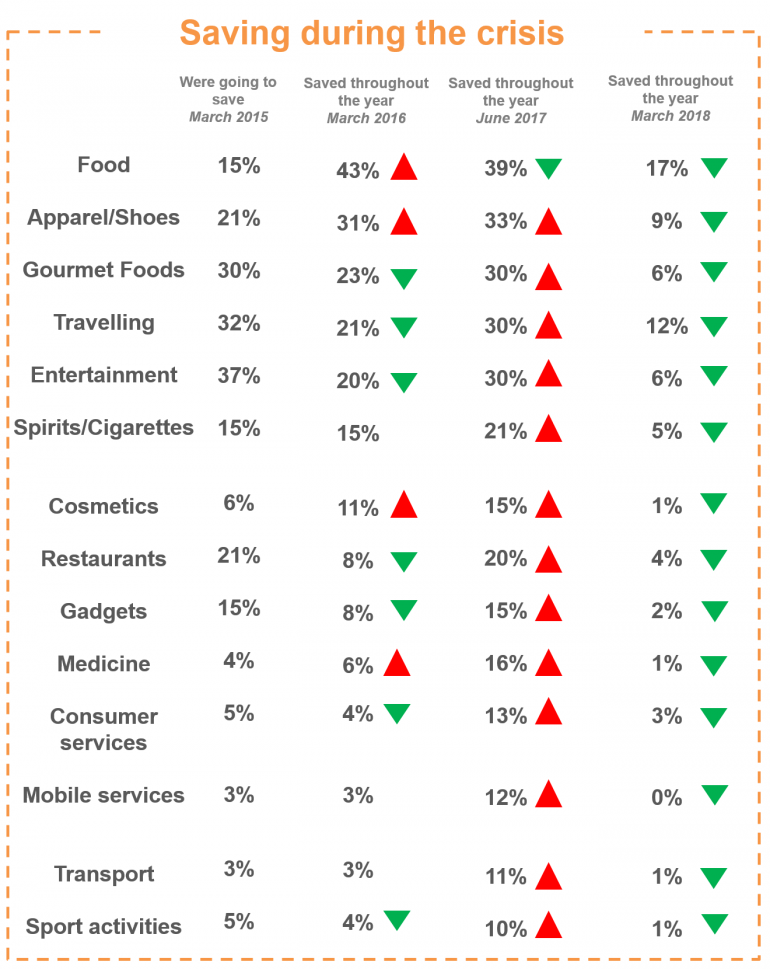 Summing up the results of the poll, Andrey Milekhin, President of Romir research holding, explains: “It appears that the hard times, connected with the total economy, have passed away for the majority of our compatriots. Prices have hardened, incomes have slowly started to rise. Last year many Russians drew a deep breath as it is impossible to live on tenterhooks for a long time. The life is going on; we want to hope for the best. According to the estimation of 2017, we can say that the crisis fade away.

*The all-Russian poll surveyed 1500 people aged from 18 and over, residing in cities and rural area in all federal districts. The sample represents the adult population of Russia.