However, allegiance to the ruble is still high.

48% of Russians claim that they have savings that is significantly lower than previous year’s index (57%) but still higher than in crisis years of 2015 and 2016. The share of Russians herewith has remained the same since last year and equals 79%. In terms of safety, Russians consider deposits at Russian banks (31%) and rubles in cash (30%) as the best modes of storage. These indices have enhanced their positions through the year. Russians prefer real estate (36%) and bank deposits (31%) as kinds of deposits. Their popularity has been at one of the highest levels over the years of observation.

In March, in the course of the regular poll, Romir research holding asked the respondents several questions on their savings. Such polls have been holding over a period of several years that allows to trace the dynamics. One of the questions touches upon savings and forms of its storage.

According to the obtained results, this year 48% of Russians have claimed that they have savings that is significantly lower than previous year’s index (57%) but still higher than in crisis years of 2015 (31%) and 2016 (27%). The share of Russians herewith has remained the same since last year and equals 79% (see Histogram 1).

The share of Russians who don’t have any savings averages 52%. However, more often such answer was given by people with low income (67%) and residents of non-urban area (59%). Residents of 500K+ cities (44%) more seldom owned up to the lack of savings.

The share of people who prefer to have savings both in rubles and foreign currency has slightly increased over the year. Among those who have savings, this answer has 19% of votes. This index has been the highest over the years of observation. The number of foreign-currency fellows has decreased more than three times and equaled 2% against 7% in the previous year (see Histogram 2). 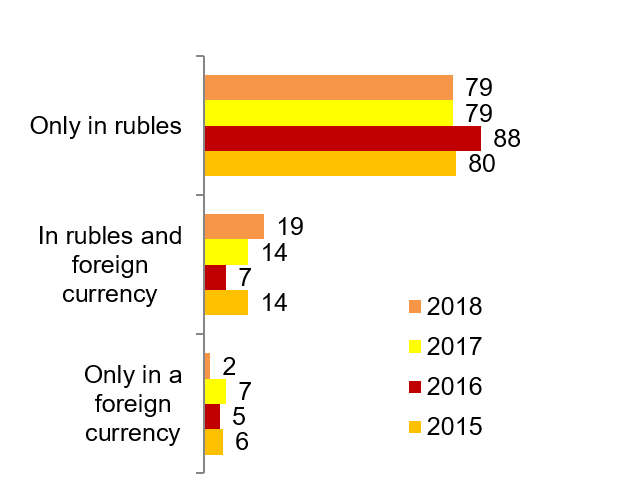 In terms of the safest modes of saving, some changes have happened over the last year, though the overall picture has remained the same (see Histogram 3). In terms of safety, Russians consider deposits at Russian banks (31%) and rubles in cash (30%) as the best modes of storage. The third place was taken by foreign currency in cash (17%).

Histogram 3. The safest forms and modes of saving (%). 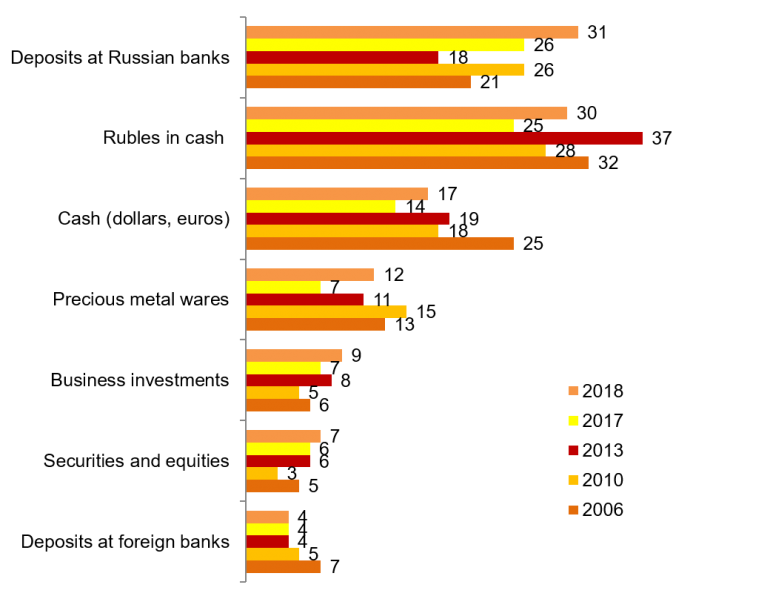 Answering the question “In what would you prefer to invest your savings?”, it has emerged that this year Russians’ sentiment have turned to be the same as pre-crisis years of 2012 and 2013 (see Histogram 4). So, more than a third of Russians (36%) would like to invest in real estate. 31% of the respondents would entrust their savings to bank deposits. Only in 2012 the share of such answers was higher (34%). It means that the popularity of investment in bank product is increasing.

On the contrary, the appeal of business investments has been decreasing year on year. To date, this index is 8% and is the lowest one after many years of observation. The interest for securities and equities among Russians has slightly increased, comparing with the previous year, to 6%, but it remains within the usual limits during the period of observation.

It is worth noting that one in ten respondents (10%) would prefer not to invest money anywhere but to save it for a rainy day. Over the year, the share of such answers hasn’t changed. Besides, the share of those who would prefer to invest in their health – treatment, resort spa, etc. – has remained at the previous year’s level (8%). 9% of the Russians consider their or children’s tuition as the best investment. The number of such answers has increased almost twofold over the year (from 5%). 4% of Russians favor a purchase of new automobile or holiday trip that is slightly lower than in the previous year (6%).

*The all-Russian poll surveyed 1500 people aged from 18 y.o. and over, residing in cities and non-urban area in all federal districts. The sample represents the adult population of Russia.