In the fourth quarter of the previous year average daily TV-viewing reach among the target audience was 78% but hereby the men spent 20 minutes less per day in front of TV sets (193 minutes) than, for instance, single women. Channel 1 is the leader among the men both by reach and time of viewing, though the NTV lovers spend the same amount of time watching it as they watch Channel 1. Radio reach is also little in average as among the women audience. However, fans of Nashe Radio can listen to it for hours. The reach of mobile internet users is 44% per day, taking into account about 20 minutes per day of using it. As in the women audience, the men most often use apps for talking and social networks. The unique kind of activities among men is playing games via Google Play.

Romir research holding continue publishing the data on media behavior of Russians, obtained on the basis of Romir Single Source Panel*. Due to the fact that the platform is the synergy of consumer and media panels, the analysis of obtained data allows not only to record the media preferences of the respondents but to overlay it with consumer behavior. Thus, the data on media preferences will be presented only in terms of a narrow segment of consumers.

*Romir Single Source Panel (SSP) – is a unique product launched by Romir team that is aimed at cross media consumption analysis. SSP has reached stable ongoing performance with a representative sample of 3 000 panelists all of whom are active participants of Romir Consumer Scan Panel. The aim of SSP Project is to obtain data on comprehensive media channel interaction experienced by products/services end buyers aged 14 and more in Russian cities with population of over 100 thousand people. The digital app is downloaded to smartphones and tablets of all panelists participating in the project. The app registers interaction with media channels thanks to its automatic content (signature) recognition (ACR) technology, as well as tracks one’s Internet consumption, including facts and duration of one’s mobile app usage instances. Also, on the participants’ stationary PCs and laptops, a special plug-in is installed that keeps track of a person’s Internet consumption from one’s desktop.

Thus, after publishing the media preferences of single women, now we present this topic through the example of the male audience. Male audience is seen as Russians aged from 25 to 50 y.o., single, living alone, without children and spouse. According to unofficial data, the number of single men and women is almost the same – about 17 million. In Moscow, however, 3 million of single women account for only 1 million of single men.

According to data from Romir Single Source Panel, the typical media behavior of single men is focused on viewing of Channel 1 and Russia 1, listening to Russkoye Radio, Retro FM or Echo of Moscow, using of VKontakte social network and WhatsApp messenger. In general, male media consumption is much like the female one, but it has its own features, which will be revealed below.

In the fourth quarter of the previous year average daily TV-viewing reach among the target audience was 78% against 72% in the female audience. The men, however, spend less time in front of TV sets than the women do – 193 minutes against 213 minutes. The most popular TV channels by reach are Channel 1 (33%) and Russia 1 (31%). The third place is taken by NTV (23%), but by average time of watching it (66 min) takes second place to the leader – Channel 1 (70 min). Single men averagely spend 61 minutes per day, watching Russia 1 and STS. And they watch less often TNT, which is popular with the women (see Picture 1).

The most popular genres are entertainment show (for instance, “Let Them Talk”), political and news programs, like “Vesti”, “Tonight” and “60 minutes”. 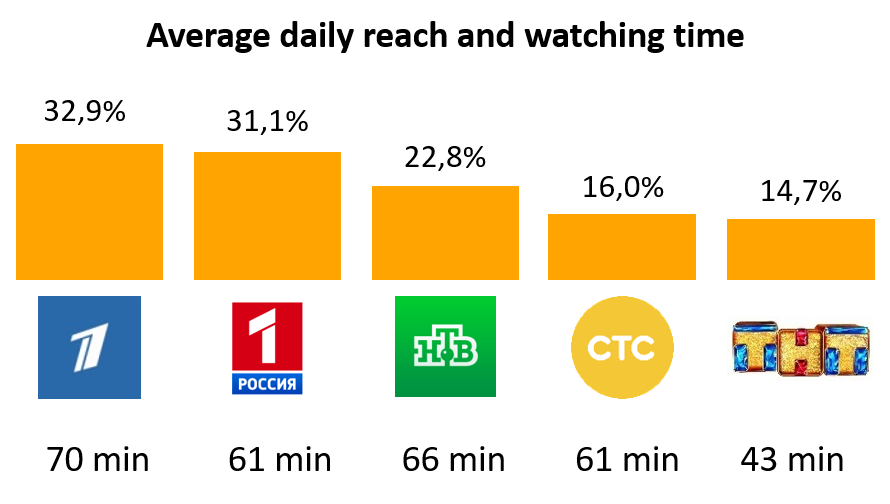 In terms of radio listening, the reach of male audience is not so big as of the female one. Radio Romantika (4,7%), NRJ (4,5%), Europa Plus (4,3%), Silver Rain (4,3%) and Retro FM (4%) have the largest reach among the targer audience. However, not being the leader by reach, Nashe Radio is the leader in terms of listening time. Single men averagely listen to it 132 minutes per day, while other radio stations attract their attention for hour- half-an-hour or less (see Picture 2). 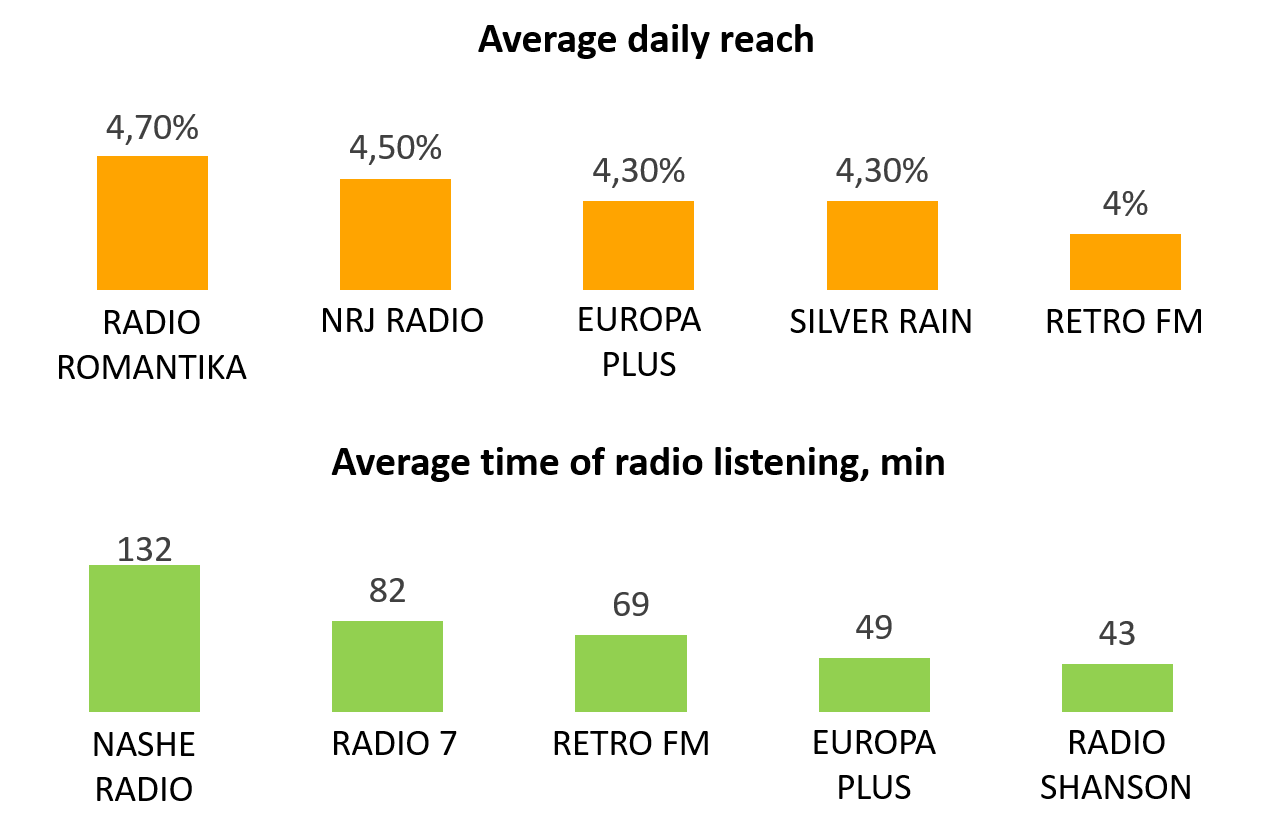 Average daily reach mobile Internet users among single men is 44% per day, taking into account about 20 minutes per day of using it. As it’s in the female audience, the men more often use mobile Internet to gain access to social networks and messengers – WhatsApp, Viber, Vkontakte. Besides, they often use Google search and watch videos on YouTube. While women prefer to spend their time in e-stores, the men prefer to play games via Google Play. Men are ready to dedicate up to 260 minutes per day to the games.

Inna Afanasenko, Head of Department for Panel Research, explains: “If we want to compare media preferences of single men and women, it can be mentioned that women generally prefer to watch entertaining channels (Friday, 2x2, Dom Kino). On the contrary, men are more conservative in their choice and choose the channels, like Channel 1, Russia 1, NTV. Preferences in radio stations are also different between men and women. Representatives of the sterner sex prefer humor and business radio stations, and women prefer radio stations with old songs (Retro FM) or modern Russian and foreign songs (Europa Plus and Russkoye Radio). However, the Internet preferences are much like the same among both single men and women – browsers, social networks and messengers.

This is the fundamental understanding of media preferences of single Russians. Obviously, the preferences can be different in more narrow age groups, different types of cities, different days and dayparts. For instance, young single men (25-32 years) generally prefer to watch entertaining TV channels, such as Pyatnica, 2x2, TNT, to listen to dance music on the radio – NRJ and DFM -, and also radio stations for road-users – Avtoradio, Dorojnoe Radio. In the mean age group (33-41 years) the range of TV channels is slightly different. They still prefer entertaining channels, but other ones – STS, Paytnica, TNT, Dom Kino.

So, the data from Single Source Panel gives to advertisers an opportunity for better understanding of the features of TA’s media behavior in order to establish more effective communication”.